Since Trevor Pinch’s death on December 16th, 2021, a few days short of his 70th birthday, from the cancer he had been fighting for over four years, a few eulogies and appreciations have already been published (; ) along with several private messages, and there will be many more. Already, one major theme is how very nice Trevor was, and how loved… and by the way, incidentally, wow! a major academic superstar. Assisting in the birth of SSK/STS (Sociology of Scientific Knowledge/Science and Technology Studies) through his work, with and under the influence of, Harry Collins (; , ); co-inventing the incredibly influential () SCOT (Social Construction of Technology) approach with Weibe Bijker (); inventing ‘sound studies’ not quite all by himself (, ); and becoming – in his fifties – a performing musician playing his own homemade – in his teens – synthesizer. And don’t miss the two recent works composed from interviews with Trevor (; ). They are all valuable. Trevor shines through them all.

Here, though, I will indulge in a doubled reminiscence of two sites that I claim privileged access to: Trev’s time as a sociology lecturer at the University of York (1984-1990) in between the Collins/Bath period and the Cornell/rest-of-his-life period; and, just before the cancer made itself known, Professor Trevor’s visit to Bogotá in 2015.

“I first met Trevor…”, as the conventional form of the genre I find myself inhabiting here has it, in 1982 at University of Bath, each of us at either end of an analogue cassette tape recorder on which I was recording my very first interview(ee) for my doctoral thesis on SSK and reflexivity (). A couple of years later, imagine my surprise when Trev landed himself a lectureship in the Department of Sociology, University of York, and became, ridiculously, my second PhD supervisor; one of many characters playing doubled roles in my thesis (research ‘subject’/research supervisor). “I remember…” our lunchtime meetings, the three of us – Mike, Trev, Malc – in the cafeteria when we would be convulsed in laughter over some serious conceptual position. “I remember…” Trev’s generosity with my work, even when he disagreed with it profoundly. (Like much else in his charmed life, Trev took on board, with no visible strain, the absurd position I had put him in.) And, despite being a protégé of Harry Collins, the arch anti-reflexivist, Trev parlayed, heroically, his initial Collinsian position on reflexivity into one of deep and productive ambiguity ().

And after I had graduated, we three – Mike, Trev, Malc – worked on another project, partly designed to keep me employed, resulting in Health and Efficiency: A sociology of health economics (). And again, though it remains under-recognised, we produced some radical work in that book, not least in our methodological innovations (see chapters 4, 6 and 8). Trev’s fearless spirit, always up for fun, helped make that book, and the work of that project, the joy it was.

And then Trev left York and England, headed for the USA and the rest of his life and the enormous success of his Cornell years.

And so, in 2015 we invited ‘Professor Trevor’ to grace our brand-new STS national colloquium here in Bogotá, Colombia. And he did, memorably. As usual, we were treated to that remarkable unremarkable ease with which Prof. Trevor interacted with everyone, faculty, students, it made no difference. He did with automatic grace, everything we asked of him. No ego. No airs. No problem! And Fun? Oh Yes Please!! For example, at the end of his stay, we took him to the ‘Andrés DC’ restaurant/dancehall in downtown Bogotá. One of our party, noticing our celebrity visiting professor’s visual similarity to the genuine global celebrity, Brian May, Queen guitarist (see Figure 1), kept hinting to the waiters, and other punters at nearby tables, that Someone Special, Someone Famous, was amongst them. Professor Trevor, of course was only too pleased with this conceit and played along beautifully. claims that Trev was always a hippy – well, yes; but then again he was, in my version of his favourite fantasy alternative reality, a superstar pop musician. 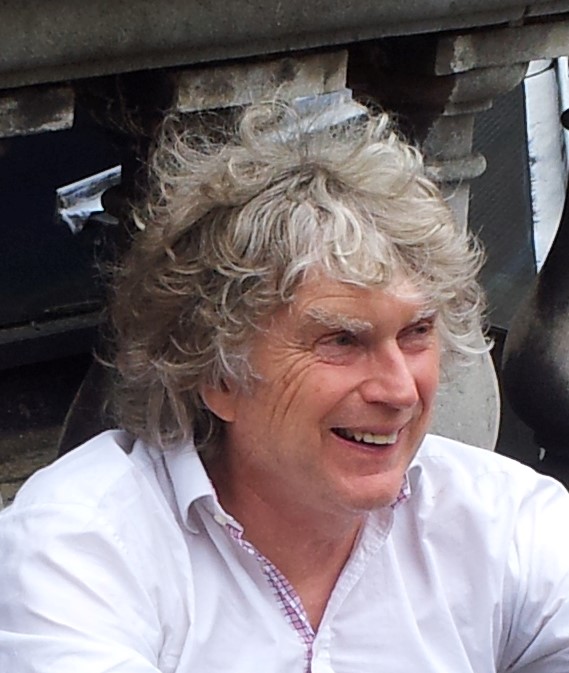 Trevor, my friend, Rest in Peace. Your soul lives on, unforgettable, unforgotten.